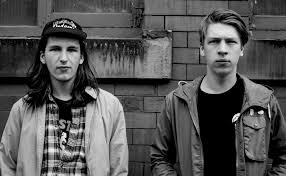 I first saw Drenge at Reading & Leeds in 2013. After reading about them a couple of weeks before in NME, I popped their name into YouTube and ran through a few of their songs.

They had this muddy, fast sound polluted with elements of garage and grunge. it was infectious. I thought, ‘this is gonna sound awesome live’.

So, at Reading & Leeds I went to check out them out on the Festival Republic stage.

These two unassuming, young guys came on stage and tore through a 30ish minute set of undiluted, relentless and most of all fun music that sent a tent full of excited kids into a frenzy.

It was a great show. I thought I’d found a little treasure to call my own.

When I got back, I bought their first record and told all my friends about it, only to discover that half of them were already onto them.

It was nice to feel cool though… if only for a little while.

Anyway, nearly 6 years later I am at the 02 Ritz in Manchester ready to see them for the 5th time.

They are in the middle a stint of UK dates to promote the release of their third album, Strange Creatures.

I hadn’t gotten around to listening to the album before the gig, so the first time I was going to hear these tracks were going to be live.

The Loveless brothers had added a couple of comrades to their line-up since I last saw them live. I knew about the addition of a bassist to thicken their sound after watching their KEXP set online a few years ago (check that out if you haven’t, it’s really good). However, there was another!

The four of them introduced the show with Strange Creatures, which begins with a distorted, creepy baseline.

A murky synth hovered in the background throughout the song. The guitar echoed. It was a song made for a terror-struck girl running for her life down a hill covered in fog, if you can imagine that?

Some of the other new songs they played had that same eerie quality – No Flesh Road, Teenage Love. Bonfire Of The City Boys was crazy; A demented poem that painted a horror story.

The base and the drums building into an explosive chorus. Eoin in a lot of the songs had put down his guitar. With his free limbs, he danced on stage, immersed in the madness.

Woven into the Strange Creatures setlist were some well-known numbers the first two records (We Can Do What We Want, Never Awake, Face Like a Skull). Drenge used their new style to shape the way they played some of these old favourites.

Backwaters was stretched out into a deranged 5-minute piece that turned the 02 Ritz temporarily into a red-socked Halloween ballroom.

Some of the crowd (myself included) would have liked to have seen it played in the way we know and love so much.

That being said, the twisted rendition they offered was brilliant. Even though they adapted some of the songs to suit the style of their new sound, Drenge returned on stage after Let’s Pretend as a duo.

Rory and Eoin Loveless ripped through Bloodsports before Eoin closed with a standalone performance of Fuckabout that a grateful crowd sang back to him. It was a great way to close the set.

After years of playing through songs from the first two records that, despite any innovation made many of us smile and think of the 90’s, Drenge return to the stage as Strange Creatures with a sound entirely their own.

With this new material, they can diversify their live sound as they did in Manchester on 29th March, so that it encompasses both the crazy and the creepy, the anger and the fear, the mosh pits and the head bobbing.

This flavour to their live presence might polarize their fans, but that’s cool – not everyone likes change. It’s strange, after all.