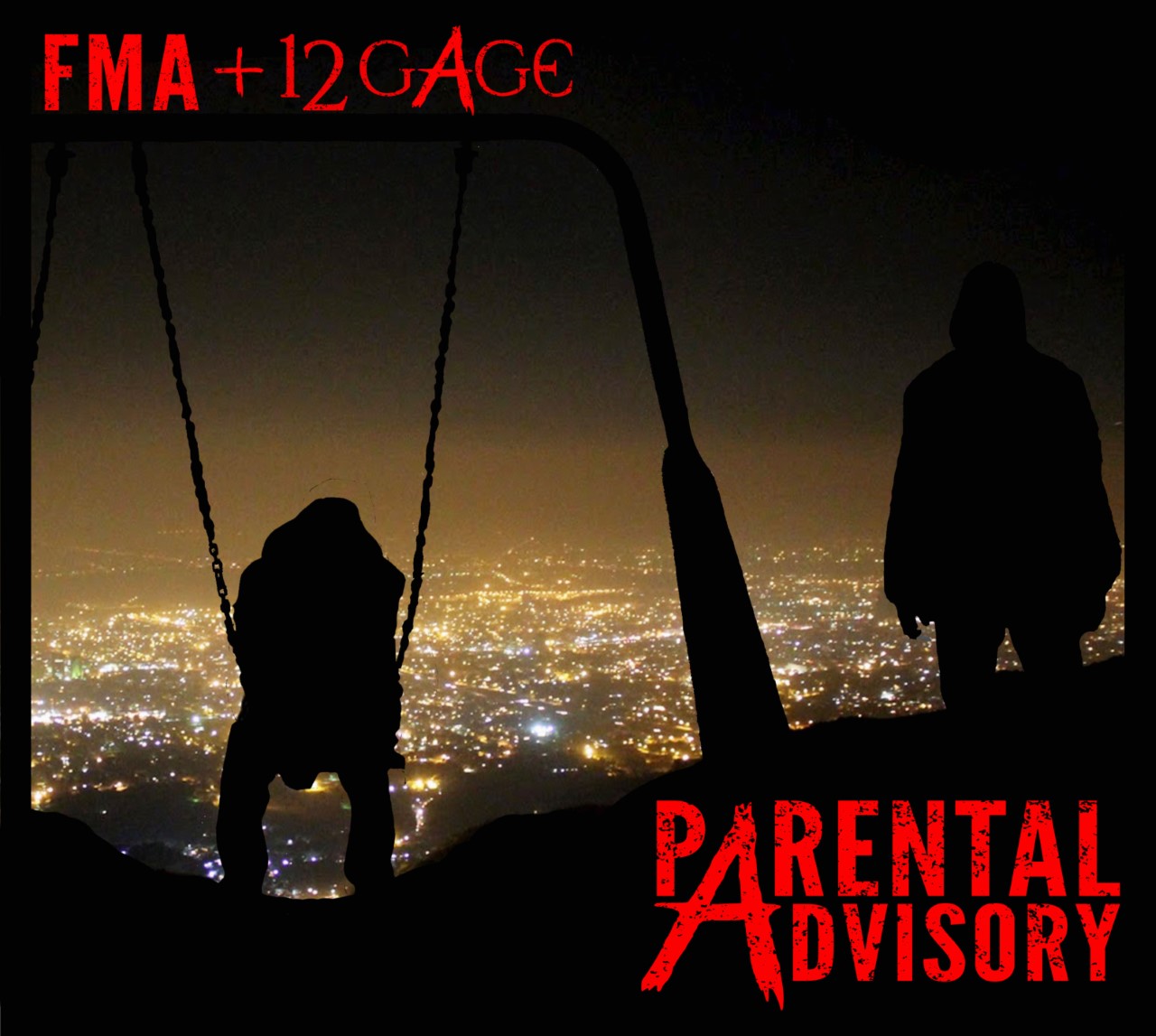 How did you get into music?
MATTHEW: Music is something that I’ve always loved and wanted to be involved in.
I used to want to be a singer but I’m tone deaf so I could only shout and scream.
As the years passed I added rapping to my skillset and began to create my own style of vocals.
I ended up joining a metal band called For My Anger (which is what the letters of my rap name – FMA – stand for).
It was in this band that I began to work with another vocalist developing the dual vocal style that me and Callum use today.
CALLUM: I saw my Dad’s band – For My Anger – perform when I was young and that’s when I decided that I wanted to be a musician.
In the beginning I had no idea what I wanted to be.
I had the thought of being a guitarist, a DJ or even a drummer, but one day my dad played me some songs by Onyx and Eminem and that was it, I was hooked on rap.
That’s when I began to write.
MATTHEW: By the time Callum came to live with me I had given up on music completely and was just concentrating on my writing career.
It was Callum’s enthusiasm and passion that ended up dragging me back into it.
Callum is the reason that FMA + 12 Gage exists today.

What do you enjoy about writing music?
MATTHEW: I enjoy the feeling of release it gives me. I’m on the Autistic spectrum and I suffer from a lot of depression.
I struggle a lot with social situations and making friends. My writing allows me to deal with the frustrations and anger that I sometimes feel.
As well as helping me deal with these negative aspects, I love creating things.
I like to make films and write stories too. When I’m making something I find it gives me a feeling of fulfilment that nothing else in this world does.
CALLUM: I enjoy being able to express myself in a way that feels natural. Conversations cause me to overthink but I’ve always been able to express myself easily through lyrics and performance.
It has helped me a lot with my mental health, my confidence and a stutter that I used to suffer from.
It has also allowed me to perform with the man who made me  want to be a musician in the first place. The man who I will one day surpass…
MATTHEW: You wish!

Where did the inspiration come from for your music?
CALLUM: From experience and emotion. If my work doesn’t resonate with me then it won’t resonate with anyone else either.
It’s a part of myself that I never express in day to day life.
When I started to write with my dad we combined our writing styles, his understanding of structure that he had learnt from script and story writing and my imagination and ability to rhyme words.
MATTHEW: I love the energy and power that’s found in metal and rap and those feelings are something I always try to capture when I’m writing.
I use the things that go on in my mind and my mental health as inspiration.
Rather than writing things as they are in reality, I use my imagination and treat my issues as a monster or force that lives in my head.
I enjoy bringing a more creative form of writing to my raps.
How difficult was the journey to releasing your album?
CALLUM: I can honestly say it was the most mentally and physically demanding thing I have experienced in my life so far.
It pushed mine and FMA’s relationship to it’s limits just as much as it pushed us as individuals, but we fought and pushed past that barrier.
We levelled up. Fun fact, when we began this project FMA said it would be completed in three months.
MATTHEW: I was only a little off.
CALLUM: It took us 24 months.
MATTHEW: Yeah, this project has been the most intense and exhausting project that I have ever worked on.
I’ve damaged my eyesight from working on the design of the album and the lyrics for the album booklet.
Every time I made a minor change to any of the 9000 or so lyrics that are included in the album booklet, the obsessive part of me would make me have to restart and recheck everything from the beginning.
It was hard work and it was very slow going, but I’m very happy with the result.
Who helped you?
MATTHEW: We owe so much to Brandon Donohue (our producer) who created the music for our album. Before we met him we were really struggling to create the music that would fit with our words.
We also couldn’t have created this album without Stephen James Buckley (who mixed and co-produced the album) he knew exactly what sound and feel we were going for and he managed to capture it.
There are a load of other people too, we made a point of listing everyone that we could think of in the album booklet.
CALLUM: My little brother, my mum and Wren Bell come to mind immediately.  My father is an obsessive perfectionist and as much as I love working with him it is also incredibly mentally taxing.
These people and so many more managed to keep me from losing grip on who I was at times and I thank them so much for keeping me grounded.
There have also been too many other people to mention who have helped in minor to major ways along this two year journey too, whether it was being involved in our musical or personal lives.
They all have my eternal gratitude.
Were there times you wanted to give up?
CALLUM: Too many to mention if I’m honest. I think creating, promoting and performing this album has changed me and my dad. It was an overwhelming project and I personally felt like it would never end.
My exhaustion and mania wouldn’t subside but now I look at the album and know a piece of mine and dad’s mental health, anger and stress are in every copy of Parental Advisory. I couldn’t be more proud.
MATTHEW: It never once crossed my mind. I’m a very stubborn person.
Interviewer Emily Vass
For more information CLICK HERE