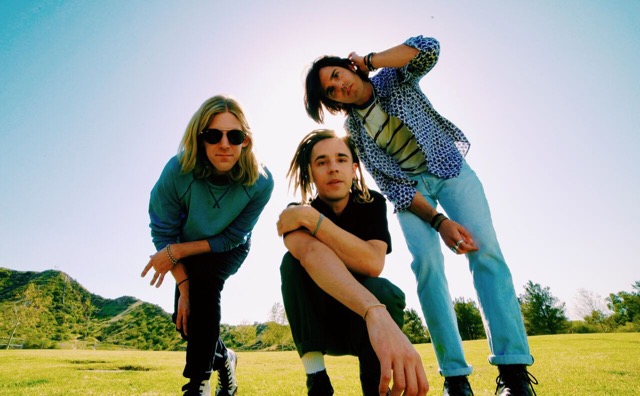 Originating from the West Coast, New Beat Fund In the midst of modern music, they are unique. With a 90’s slacker sound, a rejection of modern rock, it is no surprise to see them making a name for themselves; especially after playing alongside Blink 182, Dirty Heads, Night Riots and American Authors. With forthcoming EP ‘Chillanthropy Pt.1’; New Beat Fund are staging a revival, as shown through single ‘When She’s Sober’.

From the opening, the twangs of the guitar take me instantly into the 90’s era of pop-punk, I begin to wonder if this song is inspired by the likes of Weezer and Bowling For Soup. However, as I continue to listen the vibe turns melancholic, but not negative. Instead I get a chilled vibe (this could be accounted to the band’s West Coast heritage). I can imagine it being played in a second-hand vintage store in a run-down area of the city or in an independent coffee shop on a rainy day. The unchanging strum of guitar alongside repetitive drum beats between choruses act in the nature of the slacker genre, a rebellion from what is normal and ever-changing. The vocals set the mood of an outcast: “I don’t wanna be alive/I’m dead” and “We’re all screaming to exist’’. Some could criticise the vocals for being too whiny, however, I believe it works to bring the melancholic atmosphere.

When applying visuals to the audio, my opinion does not budge. Directed by Paul Laliberte, the music video perfectly connects visuals to the narrative. Pictured in derelict areas, lead singer Jeffrey Laliberte interacts in intimate yet detached moments with his romantic partner. Another interesting element of the video is the use of colour. The juxtaposition of the band’s monochrome clothing against the neon colours surrounding them show their stark contrast to the world around them. One final ode to the slacker vibe.

I would expect a niche following for New Beat Fund. The lyrics speak to those who feel detached from mainstream society, those who find refuge in other outcasts. Furthermore, with over 124,000 monthly listeners on Spotify, it is safe to say the band are well on their way to success.