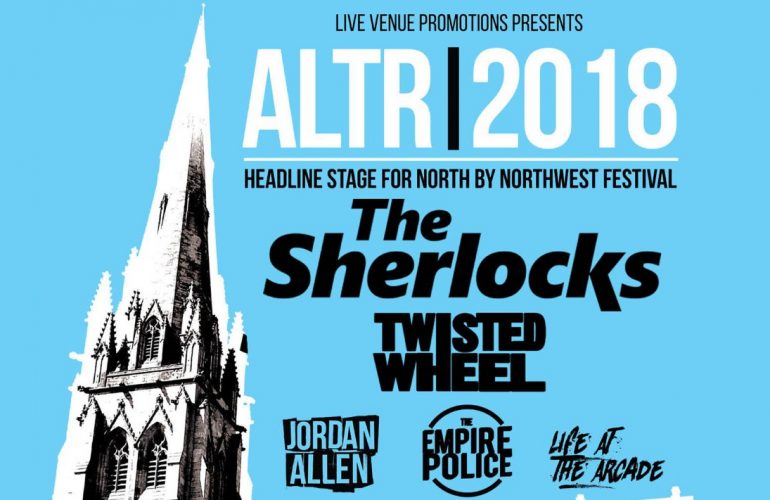 The doors of Preston’s St. John’s Minster will open up for a special 5-act gig on September 22nd. The cathedral, built, in 1855, will play host to a number of incredible acts. The gig, aptly named ALTR 2018 (think altar – very apt!), will be headlined by The Sherlocks, with support from Twisted Wheel, Jordan Allen, The Empire Police, and Life At The Arcade, and is being hosted and promoted by Preston Guild Hall. This will be the first in a series of ALTR gigs to be held in the prestigious location, with the next instalment to be announced soon. ALTR 2018 is a show that combines the traditional locales of Britain with a more contemporary event, opening up the Minster to more experiences like this in the future.

Headliners, The Sherlocks, from Bolton Upon Dearne in Yorkshire, have been keeping the flame of traditional British indie rock alive with their anthem-filled, early Arctic Monkeys-esque roster of tracks. In 2017 the band released their debut album, Live For The Moment, which entered the UK album charts at no.6, and was made up by a good amount of crowd-pleasing indie tracks – the kind that are filled with that duplicity of simultaneous angsty British grouchiness, and heartfelt, hopeful hedonism. Throughout their career the band have played an impressive number of gigs, and have shared the stage with the likes of The Libertines and Kings Of Leon. Their music defies the generation gap from the old-heads who remember when Oasis’ Definitely Maybe dropped in 1994, paving the way for Britpop and the ensuing slew of indie rock bands to dominate the charts all the way up to 2018, and the younger indie fans who have been thoroughly immersed in the second generation of British rock bands such as the Arctic Monkeys, The Kooks, and Franz Ferdinand.

Twisted Wheel, formed in 2007 in Saddleworth, Greater Manchester, have much experience with the gig scene in their 10 years of making music together. The four-piece are the only band on the ALTR 2018 line-up to have shared a stage with Britpop pioneers Oasis, having supported them in 2007 in Heaton Park. All this experience has not come without its fair share of hardships though, as the band have been through a few lineup changes, resorting in a very interesting mashup of sounds within their musical history. They will be playing songs from their upcoming album, which is set to be released in autumn of this year. It’s been a revitalising process for the foursome, with Frontman Jonny Brown stating ‘I set out to do things and was on the road comfortably and then I turned off and smashed it to bits. I get stuck into things with a passion and then I have to destroy it when the passion’s gone. Mess everything up so that I’m free again to reinvent, create.’

Bolton band, Jordan Allen, thus named for their frontman Jordan Allen, will be taking part in ALTR 2018 as well, having previously toured with The Sherlocks in early 2017. Jordan Allen have all the rocky grit of a northern indie band, but also find themselves at home within the poignant and heartfelt side of music, having a track named ‘110 Ways To Make Things Better’ dedicated to the frontman’s late father Kevin Allen, who died last year following a battle with a brain tumour. It’s this use of the stories from home that make Jorden Allen’s music special, with their lyrics being firmly rooted in the life of growing up in the north of England; love and death and partying and tragedy. You can see why one of their EPs is named Livin’ La Vida Bolton – it’s the mashup of contemporary artistic license and traditional home-life experiences that make Jordan Allen a great addition to this lineup.

It wouldn’t be a gig in Preston’s St. John’s Minster if there wasn’t a Preston band making the 5-act lineup, and The Empire Police, with their visceral and high-energy performances are the perfection addition to the bill. The four local lads met while studying a music technology course while at Preston’s Cardinal Newman College. The band have been making waves in their home city, having grown a very dedicated and loyal fanbase. At Roper Hall’s Dark Room in 2017, the real police had to be called in after fans stormed the stage of their gig there. The band pride themselves on their diverse range of musical influences, featuring the likes of The Cribs, Johnny Marr, The Strokes, and ALTR 2018 headliners The Sherlocks! It’s safe to say that The Empire Police will want to put on a fantastic set if they’re sharing the stage with one of their influences.

And to complete the lineup for ALTR 2018. It’s Life At The Arcade. The four-piece hails from Liverpool, and have been playing an uptempo mix of catchy indie pop-rock since their formation in 2015. Their music, live recordings, and demos have gained plaudits and radio plays on the likes of BBC Introducing, BBC Radio 6 music, and BBC Radio 1, and a review from The Culture Journal which reads “Guitar music doesn’t get much more infectious or downright irresistible”.

ALTR 2018 will be held at St. John’s Minster on Saturday 22nd of September, with doors at 7pm. Tickets can be purchased on skiddle.com.